Good Smile Company has had a history of making historic characters into figures, such as Mickey Mouse, Michael Jackson and to a certain extent, Billy Herrington. For the 20th anniversary of the “Sonic” game series, GSC will be turning the much beloved blue rodent into a Nendoroid. Unlike other Nendoroids based on human characters, Sonic looks correctly proportioned to his original design since in the first place, he did already have a bigger head than his body. This is quite similar to how Mickey Mouse turned out as well, so depending on your tolerance for head sizes, this may or may not be such an issue. What I like most about this Nendoroid is the inclusion of some iconic “Sonic” in-game items such as the gold ring and the Chaos Emerald. There’s also that half-way point marker we’re all used to seeing. He also comes with 3 face plates: a smiling one, a smirk and a frown so you can make him convey whatever expression you have in mind while he blitzes through. The whole package is just perfect and does Sonic proud. As a 20th anniversary treat to Sonic fans, GSC couldn’t have done better (although some chili burger accessories wouldn’t have hurt). Sonic comes out in April 2012 for 3500 yen. 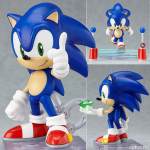 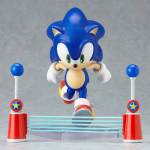